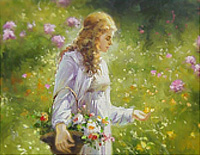 Für Elise numbered musical notation and stave are corresponding completely, which is the specified track for EOP Demon Training Camp and also suitable for his members to practice!


Für Elise (English: "For Elise"), also known as Bagatelle No. 25 in A minor (WoO 59 and Bia 515) for solo piano, is one of Ludwig van Beethoven's most popular compositions. It is usually classified as a bagatelle, but it is also sometimes referred to as an Albumblatt.