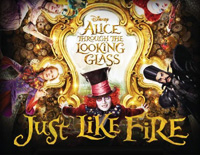 Just Like Fire EOPN is provided for you and you can open it with EOP NMN Follow ME plugin to play Just Like Fire piano by following it. Enjoy Now!


Just Like Fire is a song recorded by American singer Pink for the soundtrack to the 2016 film, Alice Through the Looking Glass. Pink co-wrote the song with Max Martin, Shellback, and Oscar Holter, who all serve as producers on the track. The song was released to digital retailers through RCA Records on April 15, 2016 and was serviced to American adult pop radio through RCA and Walt Disney Records on April 18, 2016.