I Found A Girl-The Vamps 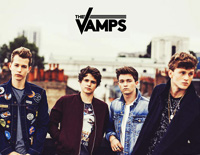 I Found A Girl EOPN is provided for you and you can open it with EOP NMN Follow ME plugin to play I Found A Girl piano by following it. Enjoy Now!


I Found a Girl is a song by British pop band The Vamps featuring guest vocals from Jamaican singer OMI. It was released on 1 April 2016 as the third single from their second studio album Wake Up (2015). The solo version of the song was earlier released as the third promotional single of the album on 27 November 2015.