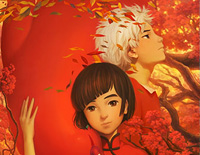 
Meet in This World is a song of Eason Chan. Meet in This World is used as a theme song of the 2016 movie named Big Fish & Begonia, a 2016 Chinese animated epic fantasy film written, produced and directed by Liang Xuan and Zhang Chun. The first animated feature film of B&T Studio, it is joint invested by B&T and Enlight Media. It was released in both 2D and 3D formats in China by Enlight Media on July 8, 2016.