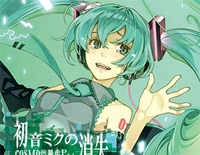 Free Hyper∞LATiON piano sheet music is provided for you. So if you like it, just download it here. Enjoy It!

Hyper∞LATiON
is a song made by cosMo@Bousou-P and sung by Hatsune Miku. The song is often interpreted as the song after "Hatsune Miku no Shoushitsu" where in Miku is being saved by a virus and desires revenge on the one who deleted her. Others think that Miku doesn't want revenge on the one who deleted her, but rather desires to become the real Miku and take her place as Diva. The title is a pun due to the presence of the ∞ sign (infinity sign) so the title is pronounced as Hyper Inflation.

The song is featured in the albums Shoujo no Kuusou Teien, InfiniteHOLiC and EXIT TUNES' Hatsune Miku no Shoushitsu (Which featuring Megurine Luka & Kagamine Rin serves as a Infinite∞HOLiC).