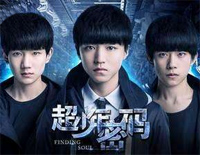 Free Fight for Future piano sheet music is provided for you. So if you like it, just download it here. Enjoy It!

Fight for Future
is used as one of the theme song to the series Finding Soul. And it was sung by TFBOYS, a popular Chinese boy band that consists of three members: Karry Wang, Roy Wang, and Jackson Yee. As of 2018, they have a gathered more than 200 million followers combined on Sina Weibo and have ranked in Forbes China Celebrity 100 for 4 consecutive years since 2015, becoming one of the youngest celebrities to make it onto the list. The band is seen as a spiritual successor of former Taiwanese band Xiao Hu Dui by the media due to high similarities between them.


Meanwhile, we also offer Hide and Seek sheet music for you to download
[ + More Information ]