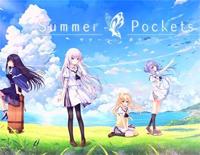 Free White with You piano sheet music is provided for you. So if you like it, just download it here. Enjoy It!

White with You
is one of the background music to the game Summer Pockets. The game's concept is by Jun Maeda, who felt that the game needed to make readers cry. Kai was brought in to direct the project, as well as co-write the scenario with Hasama and Yū Niijima. Maeda decided not to write the scenario due to similarities in themes with Key's visual novel Air, which he primarily wrote. Although Air also features a rural, seaside setting during the summer, the development team aimed for Summer Pockets to have a different feeling to it. Nostalgia and the maternal bond are prominent themes in the game. Na-Ga is the chief artist and character designer, and additional character designs are provided by Tsubasu Izumi, Yūnon Nagayama and Fumuyun. The game's soundtrack was composed by Maeda, Shinji Orito, Donmaru, Tomohiro Takeshita and Ryō Mizutsuki.