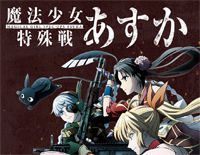 Free KODO piano sheet music is provided for you. So if you like it, just download it here. Enjoy It!

KODO
is used as the opening theme song to the anime series Magical Girl Spec-Ops Asuka. The anime series is directed by Hideyo Yamamoto and animated by Liden Films, with Makoto Fukami and Norimitsu Kaihō writing the scripts, Yoko Suzuki designing the characters and R.O.N composing the music. It aired from January 12 to March 30, 2019 on MBS and TBS before airing later on BS-TBS, AT-X, CBC.

And KODO is performed by Nonoc, a Japanese singer from Utashinai, Hokkaido who is affiliated with Kadokawa Corporation. It was released on February 27, 2019 and peaked at number 70 on Oricon's weekly singles charts