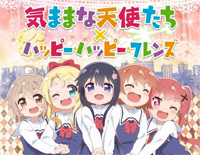 Free Kimama na Tenshi-tachi piano sheet music is provided for you. So if you like it, just download it here. Enjoy It!

Kimama na Tenshi-tachi
is the opening theme song to the anime series Wataten!: An Angel Flew Down to Me . The series is directed by Daisuke Hiramaki and written by Yuka Yamada, with animation by studio Doga Kobo and character designs by Hiromi Nakagawa. Takurō Iga is composing the series' music. The series aired on Tokyo MX and other channels between January 8 and March 26, 2019 and was simulcast by Crunchyroll.