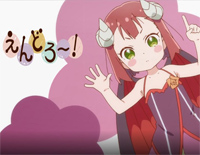 Free Endoro~ru piano sheet music is provided for you. So if you like it, just download it here. Enjoy It!

Endoro~ru
is used as the opening theme song to the anime series ENDRO~. The series by Studio Gokumi. The series aired in Japan between January and March 2019, and a manga adaptation began serialization on August 9, 2018. The anime series is licensed in North America under a Crunchyroll-Funimation partnership.

And Endoro~ru is performed by Hikaru Akao, Shiina Natsukawa, Ari Ozawa, and Inori Minase as their respective characters.