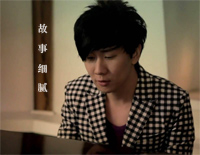 Free Romantic Mystery piano sheet music is provided for you. So if you like it, just download it here. Enjoy It!

Romantic Mystery
is a song by JJ Lin who is a Singaporean singer, songwriter, record producer, and actor. In addition to Mandarin, Lin also sings in English, Hokkien (his native dialect) and Cantonese using romanized pronunciation system, and has released his songs in Cantonese. In Taiwan, he was awarded the Best New Artist award at the Golden Melody Awards.

And Romantic Mystery is from his ninth studio album Lost N Found released on 31 December 2011 by Warner Music Taiwan.


Meanwhile, we also offer Under The Cloud sheet music for you to download
[ + More Information ]