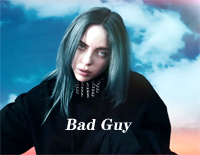 Free Bad Guy piano sheet music is provided for you. So if you like it, just download it here. Enjoy It!

Bad Guy
is a song by American singer Billie Eilish released on March 29, 2019, through Darkroom and Interscope Records. The song serves as the fifth single from Eilish's debut studio album When We All Fall Asleep, Where Do We Go? (2019), as confirmed by Billboard.

A music video for "Bad Guy" was released through Eilish's YouTube channel on March 29, 2019. It was directed by Dave Meyers. The video begins with the first track on the album "!!!!!!!" playing before Eilish kicks her way through a yellow wall and puts her Invisalign in the hands of a man dressed in black. The rest of the video features Eilish dancing frantically while repeatedly switching to scenes of her feeding pigeons, getting a nosebleed while wearing a white outfit in a blue room, pouring milk and cereal into a suited man's mouth against the backdrop of a red desert, riding on a kind of tricycle with a gang of men, and sitting on a wall in front of a group of overweight men who flex their bellies to the beat


Meanwhile, we also offer Wish You Were Gay sheet music for you to download

The Lyrics of Bad Guy: