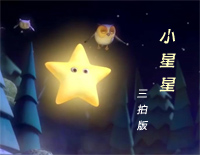 Free Twinkle Twinkle Little Star Triple Version piano sheet music is provided for you. So if you like it, just download it here. Enjoy It!

Twinkle Twinkle Little Star
is originally an English lullaby composed by Mozart. The song is in the public domain, and has many adaptations around the world.

An adaptation of the song, named "Twinkle, Twinkle, Little Earth", was written by Charles Randolph Grean, Fred Hertz and Leonard Nimoy. It is included on Nimoy's first 1967 album Leonard Nimoy Presents Mr. Spock's Music From Outer Space, with him reciting the text as Spock explaining how the star-people wish upon an earth and so forth.


Meanwhile, we also offer Twelve Variations on Ah vous dirai sheet music for you to download

Twinkle, twinkle, little star
How I wonder what you are
Up above the world so high
Like a diamond in the sky.
When the blazing sun is gone,
When he nothing shines upon
Then you show your little light
Twinkle, twinkle, all the night.
Then the traveller in the dark,
Thanks you for your tiny spark,
He could not see which way to go,
If you did not twinkle so.
In the dark blue sky you keep,
Often through my curtains peep,
For you never shut your eye,
Till the sun is in the sky.
As your bright and tiny spark
Lights the traveller in the dark
Though I know not what you are
Twinkle, twinkle, little star