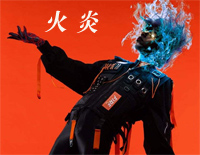 Free Kaen piano sheet music is provided for you. So if you like it, just download it here. Enjoy It!

And Kaen is performed by Queen Bee, a Japanese rock band, formed in Kobe in 2009. They are known in Japan as Ziyoou-vachi, and have described their genre of music and imagery themselves as "fashion punk".