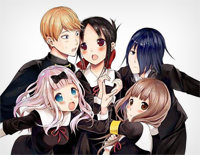 Free Love Dramatic feat. Ihara Rikka piano sheet music is provided for you. So if you like it, just download it here. Enjoy It!

Love Dramatic feat. Ihara Rikka
is opening theme song to the anime series Kaguya-sama: Love Is War. Originally Kaguya-sama: Love Is War is a Japanese seinen manga series written and illustrated by Aka Akasaka. The series is published in English by Viz Media. Two spinoff manga launched in 2018, and an anime television series adaptation by A-1 Picturespremiered from January to March 2019.

And Love Dramatic feat. Ihara Rikka is sung by Masayuki Suzuki who is a Japanese singer best known as a former member of Rats & Star(previously called Shanels). He is also called Japan's King Of Love Songs. His trademarks are sunglasses and a moustache, and he is nicknamed "Martin".