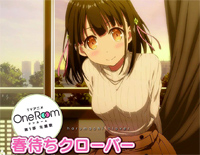 Free Harumachi Clover piano sheet music is provided for you. So if you like it, just download it here. Enjoy It!

Harumachi Clover
is one of the ending theme song to the anime series One Room. One Room features an original design by Kantoku, while Yasuhiro Okuda is adapting the design into anime. The anime was first aired on January 11, 2017 on Tokyo MX and Sun TV along with online streaming via Niconico then finished on March 29, 2017.

And Harumachi Clover is sung by M•A•O, also named Mao Ichimichi, a Japanese actress who made her major acting debut as Luka Millfy a.k.a. Gokai Yellow in the Super Sentai series Kaizoku Sentai Gokaiger.