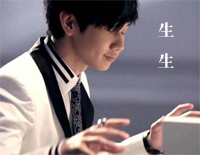 Free The Beacon piano sheet music is provided for you. So if you like it, just download it here. Enjoy It!

The Beacon
is a song performed by Singaporean singer and songwriter JJ Lin. And it was included in his album GENESIS released on December 27, 2014. Lin debuted his musical career by releasing his debut album, Music Voyager. Lin has received three Golden Melody Awards, including one Best New Artist and two Best Mandarin Male Singer.


Meanwhile, we also offer Those Were The Days sheet music for you to download
[ + More Information ]