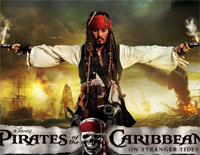 Free He's a Pirate Perfect Version piano sheet music is provided for you. So if you like it, just download it here. Enjoy It!

He's a Pirate
is one of the original soundtracks to the film Pirates of the Caribbean: The Curse of the Black Pearl.

Hans Zimmer was initially asked to score the film, but he gave the assignment to his colleague Klaus Badelt since he was working on another project at that time. However, he ended up writing most of the themes, including "He's A Pirate". The track has been subject to a number of remix versions collected in an EP titled Pirates Remixed and separate singles released notably by Tiësto in 2006 and by Rebel in 2014. Renditions of the track were also used for the credits of the four Pirates sequels.


Meanwhile, we also offer different version of He is a Pirate sheet music for you to download
[ + More Information ]