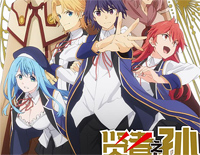 Free Ultimate☆Magic piano sheet music is provided for you. So if you like it, just download it here. Enjoy It!

Ultimate☆Magic
is used as the opening theme to the anime series Wise Man's Grandchild. The anime, which was later confirmed to air on television, is directed by Masafumi Tamura and written by Tatsuya Takahashi, featuring animation by Silver Link with character designs by Yuki Sawairi and music by Kow Otani. The series premiered on April 10, 2019 on AT-X, ABC, Tokyo MX and BS11