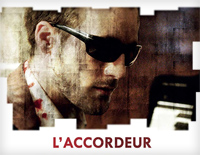 Free L'Accordeur piano sheet music is provided for you. So if you like it, just download it here. Enjoy It!

L'Accordeur
is a song adapted from German composer Robert Schumann's music. And it is also an insert song to Andhadhun which is a 2018 Indian black comedy crime thriller film co-written and directed by Sriram Raghavan. Produced by Matchbox Pictures and distributed by Viacom18 Motion Pictures and Eros International, the film stars Tabu, Ayushmann Khurrana and Radhika Apte and tells the story of a piano player who unwillingly becomes embroiled in the murder of a former film actor.