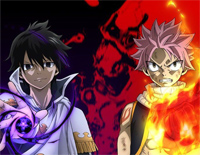 Free NO-LIMIT piano sheet music is provided for you. So if you like it, just download it here. Enjoy It!

NO-LIMIT
is the opening theme song to the anime series Fairy Tail Final Series. Fairy Tail is an anime series adapted from the manga of the same title by Hiro Mashima. Produced by A-1 Pictures and Satelight, and directed by Shinji Ishihira, it was broadcast on TV Tokyo from October 12, 2009, to March 30, 2013. It later continued its run on April 5, 2014, and ended on March 26, 2016. A third and final series will air on October 7, 2018 The series follows the adventures of Natsu Dragneel, a member of the Fairy Tail wizards' guild and mage who is searching for the dragon Igneel, and partners with Lucy Heartfilia, a celestial wizard.