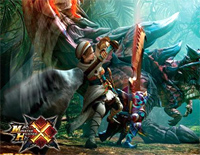 Free Fudō no Yamagami~Gammoth piano sheet music is provided for you. So if you like it, just download it here. Enjoy It!

Fudō no Yamagami~Gammoth
is one of the background music for the game Monster Hunter XX which was announced in October 2016. It was released in Japan on March 18, 2017. More downloadable content based on other games was made available for this version shortly after release. Newly represented games include The Legend of Zelda: Breath of the Wild and the Ace Attorney series, as well as more content based on Ōkami and Strider. Japanese singer Daigo was also represented in the game.