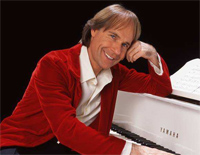 Love Is Blue is a song whose music was composed by André Popp, and whose lyrics were written by Pierre Cour, in 1967. Brian Blackburn later wrote English-language lyrics for it. First performed in French by Greek singer Vicky Leandros (appearing as Vicky) as the Luxembourgian entry in the Eurovision Song Contest 1967, it has since been recorded by many other musicians, most notably French orchestra leader Paul Mauriat, whose familiar instrumental version became the only number-one hit by a French artist to top the Billboard Hot 100 in America.

"Love Is Blue" describes the pleasure and pain of love in terms of colours (blue and grey) and elements (water and wind). The English lyrics ("Blue, blue, my world is blue …") focus on colors only (blue, grey, red, green, and black), using them to describe elements of lost love. The English version by Vicky Leandros also appeared as "Colors of Love" in some locations including the UK.

And "Love Is Blue" is noted as one of the most-covered and biggest-selling Eurovision Songs ever, and remains a widely familiar melody due in part to its continued recurrence in pop-culture mediums.

This song is so popular, so download Love Is Blue sheet music now!

The Lyrics of Love Is Blue: