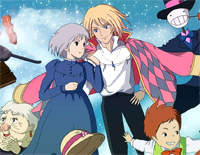 Free Merry-Go-Round of Life Full Version piano sheet music is provided for you. So if you like it, just download it here. Enjoy It!

Merry-Go-Round of Life
is a song from Howl's Moving Castle which is a 2004 Japanese animated, fantasy film written and directed by Hayao Miyazaki. The film received critical acclaim, particularly for its visuals and Miyazaki's presentation of the themes. It was nominated for the Academy Award for Best Animated Feature at the 78th Academy Awards, but lost to Wallace & Gromit: The Curse of the Were-Rabbit, in 2006, and won several other awards, including four Tokyo Anime Awards and a Nebula Award for Best Script.


Meanwhile, we also offer different version of Merry-Go-Round of Life sheet music for you to download
[ + More Information ]