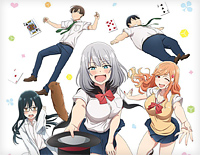 Free FANTASTIC ILLUSION piano sheet music is provided for you. So if you like it, just download it here. Enjoy It!

FANTASTIC ILLUSION
is used as the opening theme song to the anime series Magical Sempai. The series is animated by Liden Films and directed by Fumiaki Usui, with Rintarou Ikeda handling series composition, Eriko Itō designing the characters, and Takeshi Hama composing the music. It premiered on July 2, 2019 on Tokyo MX, MBS, and BS-NTV.

And FANTASTIC ILLUSION is sung by i☆Ris, a Japanese voice acting and singing female idol group, formed in 2012 by Avex.


Meanwhile, we also offer Ultimate☆Magic sheet music for you to download
[ + More Information ]