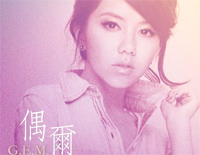 Free Occasionally piano sheet music is provided for you. So if you like it, just download it here. Enjoy It!

Occasionally is a song by Chinese singer-songwriter and actress G.E.M. In 2014, she won a Nickelodeon Kids' Choice Award for Favorite Asian Act. In 2015, she released the critically acclaimed Mandopop album Heartbeat, and was ranked 11th on the Forbes China Celebrity 100. In 2016, she became the only Asian artist featured in the Forbes 30 Under 30.