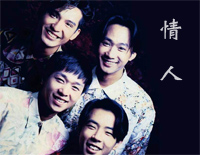 Free Lover piano sheet music is provided for you. So if you like it, just download it here. Enjoy It!

Lover
is a song by Hong Kong rock band Beyond. The band became prominent in Hong Kong, Taiwan, Japan, Singapore, Malaysia, Mainland China, and Overseas Chinese communities. The band is widely considered as the most successful and influential Cantopop band from Hong Kong.

And Lover was included in their 1993 album Rock and Roll. This was the last album before the band's late vocalist, Wong Ka Kui died after an accident while filming in Japan.