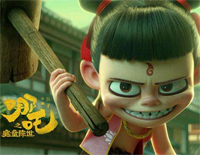 Free Nezha piano sheet music is provided for you. So if you like it, just download it here. Enjoy It!

Nezha
is a song performed by Chinese singer GAI and Da Yangyang as the theme song to the film Nezha. The film was released on July 26, 2019, in China. And it has grossed 600 million yuan in merely three days. The film broke local records with its $91.5 million opening, the highest ever for an animated film in China.


Meanwhile, we also offer From Now On I Wander With Myself sheet music for you to download
[ + More Information ]