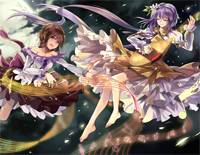 Free Gensou Joururi piano sheet music is provided for you. So if you like it, just download it here. Enjoy It!

Gensou Joururi is a song from Touhou Kishinjō ~ Double Dealing Character. Double Dealing Character is the fourteenth official game of the Touhou Project. It was announced by ZUN on his personal blog on May 11, 2013. A playable demo containing the first three stages was released on May 26, 2013, at Reitaisai 10. The full game was released on August 12, 2013, at Comiket 84. It is the first game in the series to be made available for digital download, through Playism. This release is also the first available in western territories, though it is untranslated from the original Japanese.