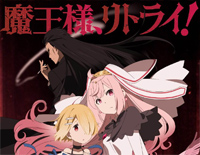 Free TEMPEST piano sheet music is provided for you. So if you like it, just download it here. Enjoy It!

TEMPEST is used as the opening theme song to the anime series Demon Lord, Retry! The series is directed by Hiroshi Kimura, with Ōka Tanisaki handling series composition, and Chiyo Nakayama designing the characters.

And TEMPEST is performed by Kaori Ishihara who is a Japanese voice actress, pop singer and idol managed by Style Cube. She was formerly part of Up-Front Agency in which she was involved with Happy! Style and Team Dekaris. She was affiliated with Sigma Seven from 2013 to 2017.