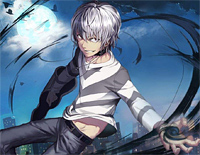 Free Shadow is the Light piano sheet music is provided for you. So if you like it, just download it here. Enjoy It!

Shadow is the Light
is the opening theme song to the anime series A Certain Scientific Accelerator. The series is animated by J.C.Staff, and directed by Nobuharu Kamanaka, with Kenji Sugihara handling series composition, and Yohei Yaegashi designing the characters. Maiko Iuchi is composing the music. It premiered on July 12, 2019 on AT-X, Tokyo MX, MBS, and BS11.

And Shadow is the Light is sung by THE SIXTH LIE that is a Japanese electronic rock band formed in May 2015 in Tokyo, Japan. Their music is known for its hybrid style inspired by the latest western music, and their overall science fiction-inspired theme connected to near future and outer space.