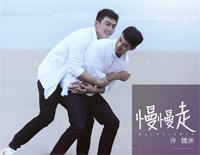 Free Walk Slowly piano sheet music is provided for you. So if you like it, just download it here. Enjoy It!

Walk Slowly is the ending theme song to Addicted, also known as Heroin. Addicted is a 2016 web series based on the boys' love novel Are You Addicted by Chai Jidan. The series premiered on 29 January 2016, and aired for three episodes weekly until 23 February 2016 when it was banned by Chinese authorities.


Meanwhile, we also offer If Hai Has Yin sheet music for you to download
[ + More Information ]