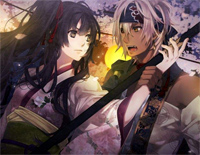 Free Omokagesou piano sheet music is provided for you. So if you like it, just download it here. Enjoy It!

Omokagesou is used as one of the background music to the game Ken ga Kimi. Ken ga Kimi is Rejet's first Japanese-inspired tale. A trial was released on November 1, 2013 and soon later the official game was released on December 19, 2013. The story takes place in the early stages of Edo period.