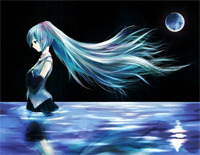 Free Oborozuki Full Version piano sheet music is provided for you. So if you like it, just download it here. Enjoy It!

Oborozuki is a song covered by Hatsune Miku. Originally it is performed by Megurine Luka. Hatsune Miku was the second Vocaloid sold using the Vocaloid 2 engine and the first Japanese Vocaloid to use the Japanese version of the Vocaloid 2 engine. Her voice is modeled from Japanese voice actress Saki Fujita. Miku's personification has been marketed as a virtual idol and has performed at concerts onstage as an animated projection (rear cast projection on a specially coated glass screen).