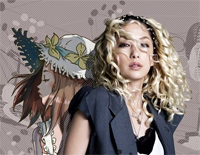 Free Boku ga Shinou to Omotta no wa piano sheet music is provided for you. So if you like it, just download it here. Enjoy It!

Boku ga Shinou to Omotta no wa, also known as The Reason Why I Thought I'd Die, is performed by Mika Nakashima. And it was composed and written by Hiromu Akita.

Mika Nakashima is a Japanese singer and actress. Five of her studio albums, one of her mini-albums and one of her compilation albums have reached number one in Japan's Oricon album chart. She also embarked on an acting career, most notably as Nana Osaki in the live action film adaptations of Nana. She sold 10 million records in Japan.