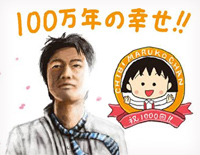 Free Hyaku-man Nen no Shiawase!! piano sheet music is provided for you. So if you like it, just download it here. Enjoy It!

Hyaku-man Nen no Shiawase!! is a song by Kuwata Keisuke as one of the ending theme songs to the anime series Chibi Maruko-chan. Original manga author Momoko Sakura wrote the teleplay for most episodes. The first series was directed by Yumiko Suda, animated by Masaaki Yuasa (who later directed Mind Game in 2004), while the music was composed by Nobuyuki Nakamura. The series attained a TV viewer rating of 39.9% on October 28, 1990, the highest rating ever attained by an animated TV series in Japan.