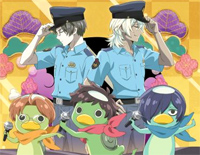 Free Omen Kappa piano sheet music is provided for you. So if you like it, just download it here. Enjoy It!

Omen Kappa is one of the original soundtracks to the anime series Sarazanmai. Sarazanmai aired from April 11 to June 20, 2019 on Fuji TV's Noitamina programming block. In English-language markets, Crunchyroll simulcasts the series, while Funimation simulcasts an English-language dubbed version of the series. All episodes written by Kunihiko Ikuhara and Teruko Utsumi.

And Omen Kappa is created by Yukari Hashimoto who is a Japanese composer and arranger. She has composed the music for a number of anime series.