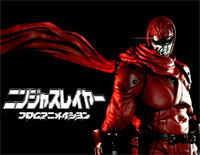 Free Fantastic Magic piano sheet music is provided for you. So if you like it, just download it here. Enjoy It!

Fantastic Magic
is used as one of the ending theme songs to the anime series Ninja Slayer. The anime premiered on Niconico on April 16, 2015, and a television broadcast started airing in April 2016. The series is licensed in North America by Funimation, who is simulcasting the series with subtitles and began streaming a dubbed version from May 21, 2015.

And Fantastic Magic is sung by TK from Ling tosite sigure. He started to collaborate with Masayuki Nakano from the former electronic music band Boom Boom Satellites.