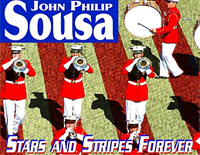 Free The Stars and Stripes Forever piano sheet music is provided for you. So if you like it, just download it here. Enjoy It!

The Stars and Stripes Forever is a patriotic American march written and composed by John Philip Sousa, widely considered to be his magnum opus. By a 1987 act of the U.S. Congress, it is the official National March of the United States of America.