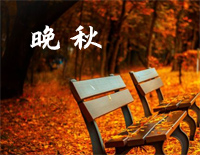 }
Free Late Autumn piano sheet music is provided for you. So if you like it, just download it here. Enjoy It!

Late Autumn is a song performed by Mao Ning who is a Chinese singer. It was included on his album with the same name Late Autumn released in 1993. Mao Ning had many partners, such as Chen Hong, Yang Yuying and Lin Ping. Many people called Mao and Yang "The cutest boy and girl"