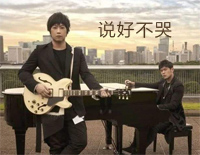 Free Won't Cry Accompaniment piano sheet music is provided for you. So if you like it, just download it here. Enjoy It!

Won't Cry is a song by Jay Chou features fellow Mandopop megastar Ashin. The song has sold millions of digital copies and topped charts in mainland China, Hong Kong and Taiwan hours after its release on Monday night.

But for some fans, the song depicts an ancient and tired archetype of a self-sacrificing woman expected to exhaust herself in order to support her man.

In the video, the female lead, played by Japanese actress Ayaka Miyoshi, supports her boyfriend’s dreams of becoming a professional photographer by working hard at a milk tea shop.