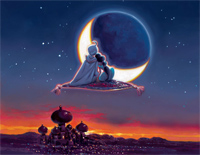 Free Desert Moon piano sheet music is provided for you. So if you like it, just download it here. Enjoy It!

Desert Moon is one of the soundtrack to the 2019 American musical fantasy film Aladdin. Aladdin was theatrically released in the United States on May 24, 2019. It has grossed $1 billion worldwide, becoming the sixth highest-grossing film of 2019, and the 34th highest-grossing film of all-time. The film received mixed reviews from critics, who praised the performances of Smith, Massoud and Scott, the costumes and the musical score, but criticized Ritchie's direction and the CGI effects. Critics were also divided on the deviations from the original animated film, such as the characterization of Jafar and Kenzari's casting.


Meanwhile, we also offer Speechless sheet music for you to download

The Lyrics of Desert Moon: