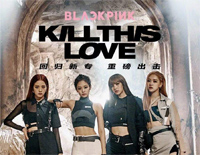 Free Kill This Love piano sheet music is provided for you. So if you like it, just download it here. Enjoy It!

Kill This Love is a song recorded by South Korean girl group Blackpink. It was released on April 4, 2019 through YG, Genie, and Interscope, as the lead single for the group's second Korean-language EP Kill This Love. It was written by Park Hong-jun and Rebecca Johnson and produced by them alongside 24 and R.Tee. The single has been described as an Electropop song, whose lyrics talk about the girls' decision to end a toxic relationship.

An accompanying music video for Kill This Love was directed by Hyun Seung Seo and uploaded onto Blackpink's YouTube channel simultaneously with the single's release. Upon release, the music video broke the record for the most views within 24 hours, accumulating 56.7 million views and has, as of July 2019, accumulated 500 million views on the platform.