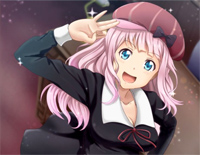 Free Chikatto Chika Chikattsu piano sheet music is provided for you. So if you like it, just download it here. Enjoy It!

Chikatto Chika Chikattsu is an insert song to the anime series Kaguya-sama: Love Is War. The series is based on the manga series of the same title, written and illustrated by Aka Akasaka. It was announced by Shueisha on June 1, 2018. The series will be directed by Mamoru Hatakeyama and written by Yasuhiro Nakanishi, with animation by A-1 Pictures.

And Chikatto Chika Chikattsu is sung by Konomi Kohara who is a Japanese actress and voice actress affiliated with Office Osawa. She debuted as a voice actress in 2016 and started to get main roles in 2017.