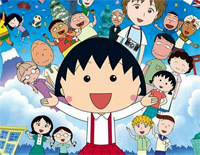 Free Odoru Pompokolin Easy Version piano sheet music is provided for you. So if you like it, just download it here. Enjoy It!

Odoru Pompokolin
is performed by Japanese pop group B.B.Queens as the ending theme song to the anime series Chibi Maruko-chan.

In August 13, 2014, the girl-group E-girls released a cover of "Odoru Ponpokorin" as their 10th single, coupled with a cover of Dreams Come True's "Happy! Fun! I love!" as the B-side. This version of the song was used for three months as the opening song of the anime. The single sold 43,653 in its first week.

In May 2016, TWICE Japanese members Sana and Momo did a musically version of the said song. The Thailand version was then used for their first concert in Bangkok, Thailand.