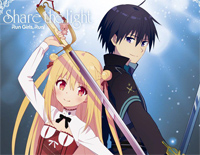 Share the light is a song performed by Run Girls, Run! as the opening theme song to the anime series Assassins Pride. The anime adaptation was announced during the Fantasia Bunko Dai Kanshasai 2018 event on October 21, 2018, later revealed to be a television series animated by EMT Squared. It is directed by Kazuya Aiura, with Deko Akao handling series composition, and Maho Yoshikawa designing the characters. It premiered on October 10, 2019 on AT-X, Tokyo MX, SUN, and BS NTV.


Meanwhile, we also offer Ijin-tachi no Jikan-Time of Foreigners sheet music for you to download
[ + More Information ]