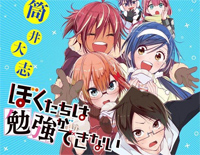 Free Can now, Can now piano sheet music is provided for you. So if you like it, just download it here. Enjoy It!

Can now, Can now is used as the opening theme song to the second season of the anime series We Never Learn. We Never Learn originally is a Japanese shōnen manga series written and illustrated by Taishi Tsutsui. It started serializing in Weekly Shōnen Jump magazine on February 6, 2017 with the individual chapters collected and published by Shueisha into twelve tankōbon volumes as of June 2019. Then it was adapted to anime television series.