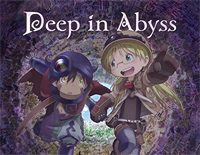 Free Relinquish piano sheet music is provided for you. So if you like it, just download it here. Enjoy It!

Relinquish is composed by Australian composer Kevin Penkin as an insert song for the anime series Made in Abyss. Originally Made in Abyss is a Japanese manga series by Akihito Tsukushi and published by Takeshobo. An anime television series adaptation by Kinema Citrus aired its first season from July 7 to September 29, 2017, and a sequel film will premiere on January 17, 2020. The story follows an orphaned young girl, Riko, who finds and befriends a humanoid robot Reg and descends with it into the titular "Abyss", that leads deep into the Earth, in hopes of finding her mother.


Meanwhile, we also offer Those Everyday Feels sheet music for you to download
[ + More Information ]