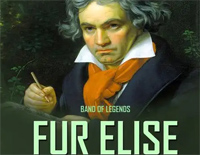 }
Free Für Elise piano sheet music is provided for you. So if you like it, just download it here. Enjoy It!

Für Elise (English: "For Elise"), also known as Bagatelle No. 25 in A minor (WoO 59 and Bia 515) for solo piano, is one of Ludwig van Beethoven's most popular compositions. It is usually classified as a bagatelle, but it is also sometimes referred to as an Albumblatt. A crucial figure in the transition between the Classical and Romantic eras in Western art music, he remains one of the most famous and influential of all composers. His best-known compositions include 9 symphonies, 5 concertos for piano, 1 violin concerto, 32 piano sonatas, and 16 string quartets. He also composed other chamber music, choral works (including the celebrated Missa solemnis), and songs.

The version of "Für Elise" we hear today is an earlier version that was transcribed by Ludwig Nohl. There is a later version, with drastic changes to the accompaniment which was transcribed from a later manuscript by Barry Cooper.

Meanwhile, we also offer For Elise-Für Elise-simplified Version sheet music for you to download