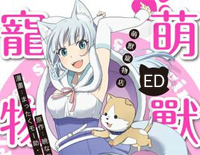 Free Anecdote piano sheet music is provided for you. So if you like it, just download it here. Enjoy It!

Anecdote is a song performed by Momosumomosu as the ending theme song to the anime series Kemono Michi. It was later announced that the adaptation would be a television series titled Kemono Michi: Rise Up, with animation by ENGI. The series is directed by Kazuya Miura, with Touko Machida handling series composition, and Tomoka Noumi designing the characters.